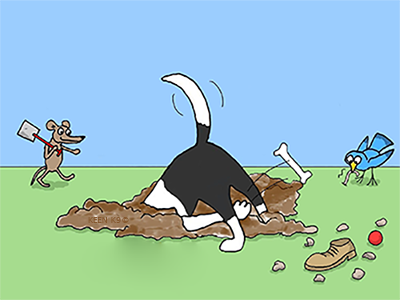 IS YOUR DOG A DIGGER, OR A GARDENER?

Conditioning is the association between stimuli and behavior. The dog drools (behavior) at the sight of food (stimulus). Each time the dog sees food a bell rings (second stimulus). Once paired the food and  bell cause the dog to drool at the sound of the bell without any food in sight. This is conditioning.

Extinction is when a response ends after a reward has been removed. If when your dog jumps up for greetings, you respond with happy talk, the behavior increases. If ignored, jumping up will end because the reward is no longer available. Introducing an alternative behavior or DRI is a better solution for jumping up.

Spontaneous recovery happens when there is an extended period of time between an event which has been habituated in the past, and re-exposure to a similar event. After habituation, the dog no longer reacts. Upon re-exposure, the dog reacts once again.

Desensitization is used to develop tolerance. If a puppy gets overexcited at the sound of the doorbell, playing a recording of a doorbell will reduce this behavior. At first play sound very softly and gradually increase the volume as long as the puppy remains calm. Never push the puppy over a comfortable threshold.

For severe behavorial issues, your veterinarian may prescribe medication, which is most helpful when used in combination with behavioral modification.